We are delighted to announce Dr. Marius Lindauer as keynote speaker. Marius Lindauer is a junior research group lead at the University of Freiburg (Germany). His goal is to make the technology behind state-of-the-art research on artificial intelligence (AI) available to everyone. To this end, his research and tools aim at automating the development process of new AI systems. He received his M.Sc. and Ph.D. in computer science at the University of Potsdam (Germany), where he worked in the Potassco group. In 2014, he moved to Freiburg i.Br. (Germany) as a postdoctoral research fellow in the AutoML.org group. In 2013, he was one of the co-founders of the international research network COSEAL (COnfiguration and SElection of ALgorithms) and is nowadays a member of its advisory board. Besides organizing the first open algorithm selection challenge and winning several international AI competitions, he was a member of the team that won the first and second edition of the international challenge on automated machine learning.

The title of Marius’ talk is “Automated Algorithm Selection: Predict which algorithm to use!” 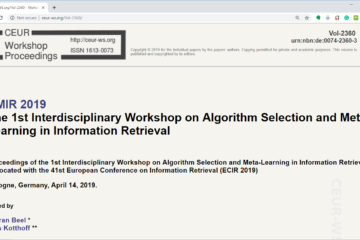 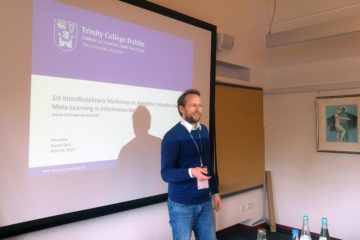 AMIR 2019 — The 1st Interdisciplinary Workshop on Algorithm Selection and Meta-Learning in Information Retrieval — is over, and it was a full success. We had many interesting presentations and around 20 attendees. The following Read more… 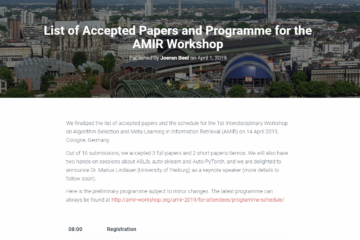 List of Accepted Papers and Programme for the AMIR Workshop

UPDATE 2019-05-22: The proceedings are available.   We finalized the list of accepted papers and the schedule for the 1st Interdisciplinary Workshop on Algorithm Selection and Meta-Learning in Information Retrieval (AMIR) on 14 April 2019, Read more…